AIB establishes and maintains a permanent collection of materials relating to the history, development and contribution of radio and television in Iowa. 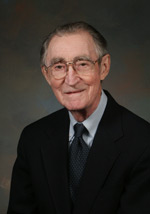 One of the most distinctive and influential voices in Iowa broadcasting history is now silent.

Grant Price, hall of fame broadcaster and professor emeritus of Communication Arts at Wartburg College, died peacefully with family present on Friday, Oct. 17, after a short illness. He was 85.

Price began his radio career in 1941 on KSCJ in Sioux City. After service in World War II, he returned to Sioux City, becoming the one-man news department at KTRI radio. In 1948, he moved to the powerhouse signal of KXEL-AM in Waterloo, where he succeeded H.R. Gross as news director. A decade later, as television was capturing the attention of America, Price became news editor for WMT-AM/TV in Cedar Rapids in 1959, and director of news services for the stations in 1961.

During his time at WMT-TV, the station was the dominant news source in eastern Iowa, with rating totals greater than the station's two competitors combined. After WMT was sold to out of state owners, Price left Channel 2 and returned to Waterloo, serving as vice president for news and public affairs for the Black Hawk Broadcasting Company and overseeing the news operations for the company's flagship station, KWWL-TV.

When Grant Price left WMT, it was a dominant #1 in the ratings; within two years of his arrival at KWWL, Channel 7 became the market's top-rated newscast, a position the station would hold for more than 30 consecutive years.

During his time at KWWL, Price was well known for hosting the weekly public affairs series "Focal Point: The Community" and for delivering regular on-air editorials, called "Viewpoint". While he retired from the newsroom in 1989, he continued to deliver "Viewpoint" editorials until 1993. He also hosted the unique quarterly "Broadcasting and You" programs, where station officials answered questions from KWWL viewers.

At a time when most would have been satisfied after nearly a half century in the field, Grant Price found a new challenge: becoming a college professor. Following in the footsteps of fellow broadcasting legend Jack Shelley, Price became an educator, assuming the title of R.J. McElroy Chair & Executive-in-Residence at Wartburg College. He founded the television broadcasting program at Wartburg, and taught classes there each semester until 2005.

In 1994, Price determined that much of the history of radio and television in Iowa was being lost. Feeling that this history was worth saving, he started the Iowa Broadcasting Oral History Project. To date, more than 125 interviews have been conducted with many of the men and women who built electronic media in Iowa. In fact, Price conducted three interviews for the collection this past summer alone. The Iowa Broadcasting Oral History Project led to creation of the Archives of Iowa Broadcasting, designated as the state's primary repository for materials relating to radio and television in Iowa.

"Grant Price was a giant in the history of broadcast journalism in Iowa. His life gave meaning and purpose to the First Amendment guarantees of Freedom of Speech and Freedom of the Press. Grant Price believed in 'paying it forward' by devoting his life to teaching and mentoring journalism students and young reporters. Accuracy, objectivity and fairness were not just 'aspirations,' to Grant, they were rules to live by. Grant Price was my friend. But more than that, Grant Price was my Hero. His death leaves a void that will be impossible to fill."

Your generous gift will help sustain the Archives of Iowa Broadcasting, assuring that this a one-of-a-kind collection will be available to future generations.