Illuminating the Word of God for a New Millennium -- On Display at Wartburg College Throughout 2014.

The original manuscript of The Saint John's Bible is curated at Saint John's University in Collegeville, Minnesota.  The Heritage Edition on display in 2014 at Wartburg College is a fine-art reproduction of the original which provides public access to this timeless treasure.

No two Heritage Editions are exactly alike as each as each major illumination is hand treated.  The set includes full-size, museum-quality reproduction volumes produced in a limited edition for collectors and institutions.  Using the highest quality printing techniques and materials, beautifully bound and embossed with metallic foils, this edition is itself a work of art.

Under the direct supervision of Donald Jackson, only 299 sets of the Heritage Edition have been produced.  No further sets are planned; it is truly a limited edition.

The Scribe and His Dream 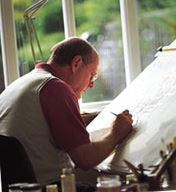 Donald Jackson, one of the world's renowned calligraphers and the scribe to the House of Lords and Her Majesty Queen Elizabeth II,  had a lifetime dream of crafting a hand-written, hand-illuminated Bible. In 1995 Father Eric Hollas, OSB, a monk at Saint John's Abbey, brought the idea to the community and they embraced Jackson's dream. It is the first hand- written, illuminated Bible in over 500 years.

The Saint John's Bible is a work of art that unites scripture (NRSV) and illuminations that reflect the Word of God for a new millennium. The artwork contains cave drawings, DNA, The Hubble Telescope, the AIDS virus and the Twin Towers.

Donald Jackson on May 9, 2011 shortly after penning the final word of The Saint John’s Bible (Image Courtesy of Donald Jackson)    www.saintjohnsbible.org

Timeline for The Saint John's Bible

2000 - March
On Ash Wednesday, the first words were written from the gospel of John: "In the beginning was the Word, and the Word was with God, the Word was God..."

2007
Work on the Heritage Edition begins

Initial Design
A computer is used to size text and define line breaks.  The two-foot by three-foot pages of each volume are laid out in full-size spreads.  This enables scribes to work on pages simultaneously, maintain consistency, and avoid awkwardly breaking words.

Caligraphy
The script used in The Saint John's Bible was designed by Donald Jackson with three qualities in mind.  The text had to be readable, modern, and appropriately dignified for the Bible.  Subtle differences in the final script mark the work of the six individual scribes on the project.

Ink:  Rare Chinese black ink made in the 1890's was used for all the calligraphy. Vermillion, lapis lazuli, and other cakes and powdered pigments are used for color. The materials are mixed with egg yolk and water to make paint that is thicker than the black ink and loaded onto the quills using brushes.

Quills:  All the script is written using quills hand-cut by the scribes. Only the largest flight feathers, called 'primaries,' are used: goose quills for the main body of text, turkey and swan quills for heavier letter forms.

Gold:  Gold leaf makes the manuscript truly illuminated. Using the moisture of breath imparted through a bamboo tube, the artist activates the glue binding agent in gesso until it bonds with the gold leaf. Burnishing tools and brushes finish the gilded image.

Pigments:  Vermillion, lapis lazuli, and other cakes and powdered pigments are used for color. The materials are mixed with egg yolk and water to make paint that is thicker than the black ink and loaded onto the quills using brushes.